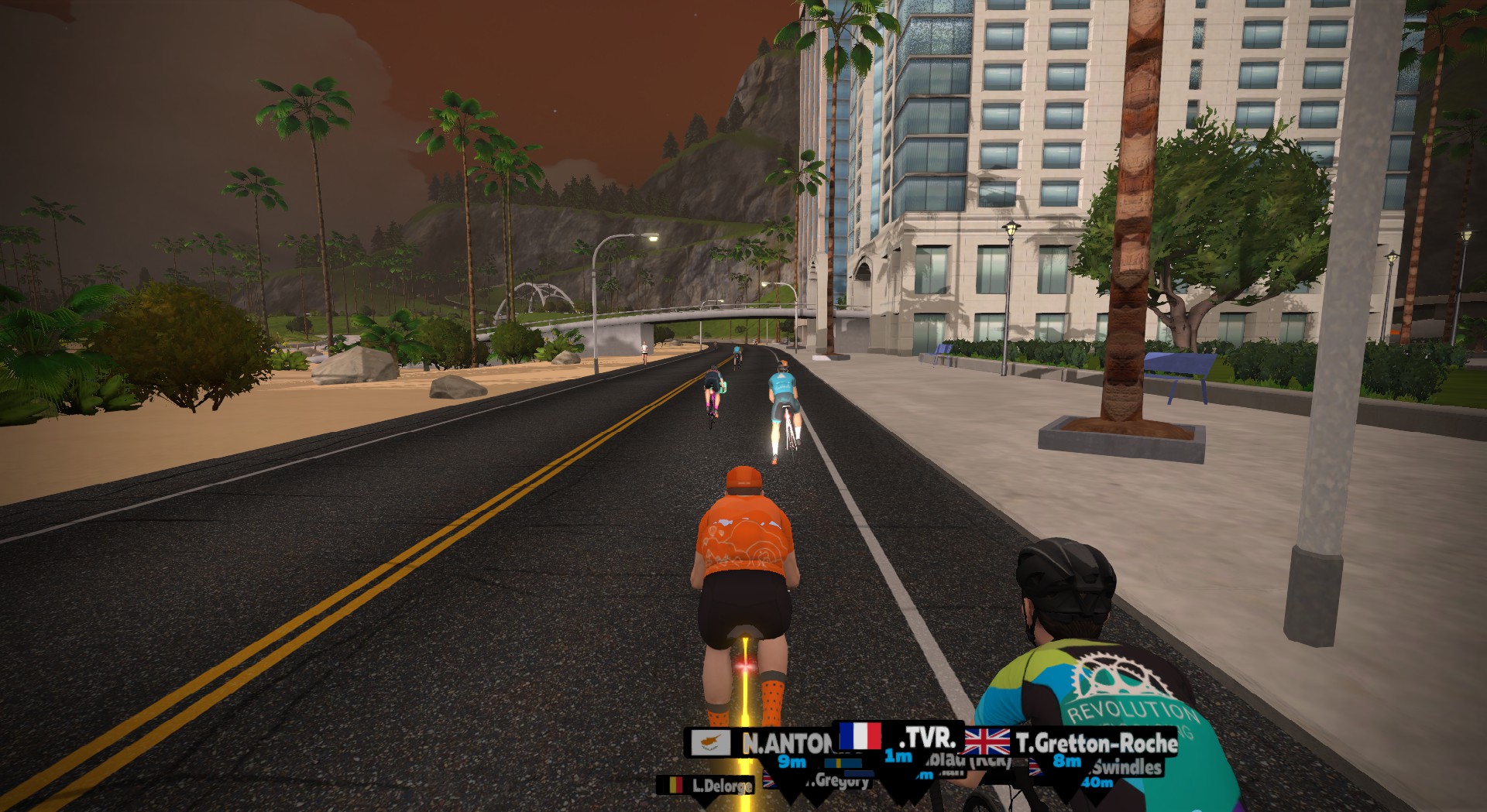 I should lay low, waiting for the cat downgrade by next month’s end, now that I already have a nice triplet of sub-2.5 races in the ZP race records. But I just couldn’t help myself. I had to cheat a little more today and picked this shortish race. It seemed ideal. I chalked it up as honing my cheating skills.

The start was hard. A few D’s joined up with some C’s in a D front group that I decided quickly not to try to go with. I went with the second group instead the initial km’s, but we actually caught up with the front group in the underwater tunnel and stuck with them.

I was monitoring my Watts in the Wahoo Fitness app closely of course, and some 12 min into the race the group was still pushing 3.0-3.2 and my average W was by then dangerously high, well above 200W. At 68 kg plus another 7 kg of unflattering belly fat, I had only 8 min to get the average down to 185W, my mark to be on the safe side.

I dropped and just spun the legs for a few minutes. Some C’s went past. Approaching the foot of the volcano a mixed C/D group caught up with me. I had monitored them for a while and they weren’t going much slower than the group I had dropped from, so I quickly decided to let them just pass.

It actually seemed to take a while for the possibly legit D’s to reach me, so I then opted for a semi-slow pace of 2.0-2.2 to postpone getting caught as much as possible. I wanted to give them reason to work hard to wear them down. It turned out I timed it well. By the time the first seemingly legit D rider caught up with me, I was barely below the 185W mark.

I stopped the Wahoo clock and restarted it after around 24 min and by then the average was still dropping. The first 20 min are always the most dangerous, the time frame where you are most likely to go over limits as a cruiser. Since I can’t actually measure a rolling 20 min window in the Wahoo app, and since the race would last around two flips of a 20 min hourglass, it made sense to restart the measuring just to be sure I wouldn’t go over limits on the second half. It seemed unlikely but you never know what comes from behind.

The D rider that eventually caught up with me, an Englishman, came together with a C rider that we both let go once the climb started. The Englishman, who later got the silver on ZP, seemed well aware of the situation in the race and quite possibly what I was up to as well. I let him do all the work of course. Not that we were going over limits, but I wanted generous wiggle room in my average for the final stretch and it seemed like I would be getting plenty of wiggle.

Towards the latter part of the climb a Norwegian D caught up with us. I had decided to let it happen. After some struggle around who would pull or set pace, the Norwegian decided to up the pace. The Englishman seemed to make a quick decision to let him go. To me, though, it was a tough choice. On the one hand the Norwegian was pushing 2.7 and it was still a little early to let my average rise again. (Also, he could have been going quite hard solo to get to us, meaning he might even already be DQ’d.) On the other hand, this was a climb, which could motivate a high tempo in the climb since the Norwegian would most likely slack off a bit on the descent.

I reluctantly let the Norwegian go. Then I changed my mind and dropped the Englishman to bridge to my neighbor (I’m Swedish as you know) by the arch. As I suspected the pace dropped significantly on the descent and I think I hit a low of 169W on my second cumulative average. That meant I would be able to go flat out for quite some time toward the finish. The question was only when to drop the hammer.

During the final part of the climb I noticed that guys from the front D group were once again visible in the list on the right. They had slowed down considerably. In fact, they were only some 17 sec away. Potentially, they could pose a threat. And potentially, I could bridge to them if they kept the pace for yet some time. But they went so hard the first 20 min… I decided against trying to catch up with them, which would have meant an early hammer, a real effort in fact.

Remembering my last cruise on Champs Elysées, where I had brought out the hammer from the back pocket at the overpass, some 1.5 km away from the finish, I decided to go a little later this time. The Norwegian was most likely heavier than me and with more muscle mass (the average rider always is), so I couldn’t risk a sprint against him. I would have to drop him well outside sprint range.

By the 900m mark I decided it was hammer time. The Norwegian didn’t fight back. With a safe time gap I coasted the last meters to the finish.

Obviously, I got a UPG on ZP for this but stayed safely within limits for an average of 2.4 W/kg. The Norwegian got a DQ too or wasn’t registered. And, as mentioned above, the Englishman took the silver 40 sec behind me. Come October and I will steal that silver.

I wouldn’t want to the deny a young boy the pleasure of winning a race or two in Zwift. Really. Because it will do him far more good than for us grumpy old men. But still… what can you say? Well played, ZP! Hope you’re doing alright so far down in the bunker.

My effort for the race was as follows:

Ignore the green blob. That’s the spindown. Consider the rest. Don’t think for one second that this is what a reasonable race effort over 42 min may look like, that it is somehow within the acceptable range. The racing was a complete joke. That’s what cruising is about after all, a slice of roflcopter with some WTFPWN! sprinkled on top. I could have gone MUCH harder. I should be going MUCH harder. I would have gone MUCH harder in my true category. And any race participant in Zwift with their FTP set correctly would have to work MUCH harder doing e.g. the McCarthy WO or Zwift’s 30/15’s GWO.

Think about that the next time you see a HR graph like this from a race podium.