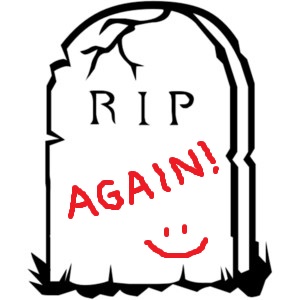 This was one race I just had to cruise! Sponsored event featuring a high-profile brand. Is there ever a better opportunity to display the filth Zwift swept under the carpet? Now, nobody is interested in anything but cat A here. They are the ones to be crowned ambassadors, i.e. a few of them will get to be a virtual ad sign for a bit. Almost like going pro, no? Well…

For best effect, although from a low category, you would of course want to win an event like this as a cruiser, and then brag openly about how you cheated yourself to a win… without actually breaking any rules. If it wasn’t for the usual cat A focus, I would be furious as a sponsor with a brand name to protect if I was fully aware of what a piece of unfair crap Zwift racing really is. And as an undercover cruiser I would just love to help create a little awareness.

The only problem was this was going to be a very difficult race, for a number of reasons.

First, the start list was huge. Three minutes before start I counted 98 ZP registered participants and a few more probably dropped in while I warmed up. We can safely assume there were many unregistered as well even though the rules said you needed to be registered in order for your result to be taken into account, although in the end only 86 finished in cat D. It was a long and tough race that would still attract a lot of people who don’t race regularly and who then got more than their fill during the race and bailed out. Anyway, it is more difficult to cruise a big field since the probability that there is someone in the race who can beat you increases with every additional participant.

Second, how can I be so sure there were lots of unregistered without actually looking? (I never bothered.) Well, it’s a fair assumption that people just wanted in, not caring too much about the rules, since there were plenty of sandbaggers too. I counted 33 cat C’s or worse 3 min before the race. They would all get UPG’s of course, but that didn’t stop them from joining. There were probably quite a few unregistered sandbaggers as well. And cruising a race with a lot of sandbaggers in it is difficult for two reasons. They may confuse you and have you believe they are threats to your placing, and if you don’t watch it you might be tempted to follow which could bust your 20 min average. Also, perhaps even worse since you can’t control the damage yourself, sandbaggers set up the heavies for a win. As a light cruiser I can’t follow a sandbagger for long or I will go over limit. But a heavy might be able to suck the slower sandbaggers’ wheels and still stay within limit e.g. by getting early separation in the first minutes that may be hard to bridge, if you are even aware of their presence somewhere in the far distance in front of you.

Third, an additional problem with huge start lists is that they are near impossible to keep track of during the race. Who is in your group at the moment? Are they on the ZP registered list? Are they strong, will they last? Are they legit, sandbagging or cruising? With so many participants you would need your own personal directeur sportif to shout in your ear what to do and how to respond to what is going on around you. Do the dishes and call in the favor from next-of-kin is my advice. It would actually be really useful when cruising. (I do the dishes and more but I still don’t get my directeur sportif – life isn’t fair!)

Fourth, I noticed many threats in the start list. There was an unusually large number of “nearly C”, loads of heavies and quite possibly cruisers too (I didn’t have time to go through the race histories of all the stronger participants of course).

Too many factors to control. I would have to focus on my average and just play the race by ear. The result? It was OK, I think. I got a 5th on ZP and missed the podium (the bronze to be specific) in a sprint, and if you have read earlier posts you may recall that I am not a strong sprinter.

Actually, it was a mistake to allow the short sprint to happen at all. I was planning on doing the usual thing and go on a push or long distance sprint about a km from finish, but being low cat C trash and after quite a few races recently I must admit I was a bit tired and decided to gamble instead. In hindsight it might not have mattered to the result, looking at the race histories of the small group I was in, but at least there would have been no real downside to trying the long sprint as the worst that could have happened was 6th. Note to self: Don’t let it go to a sprint ever again if you can avoid it…

So what about the rest of top 5? The race was won by a superheavy who finished minutes ahead of us. Since all my 20 min blocks (3 ½) were near limit I know for certain that it would have been absolutely impossible to stay with a guy like that without getting a WKG, not that I ever even knew of his presence ahead in the race. He was pushing almost 300W!

Silver was a heavy who worked hard and who I think pushed solo for the last stretch, which kills speed quite a bit. If a long sprint would have been successful (I doubt it) I just might have connected with him, but then he would have destroyed me in the sprint as I would have been toast and wouldn’t be able to match his Watts even if rested.

As for the little group I was in, which included 3rd, we were all cruisers except for 6th who worked hard and had a legit history. He had a clear weight advantage on me but most of the others beat him on the scales, so all in all he was double disadvantaged. If I could pick a deserving winner in this race, it would be him for sure. 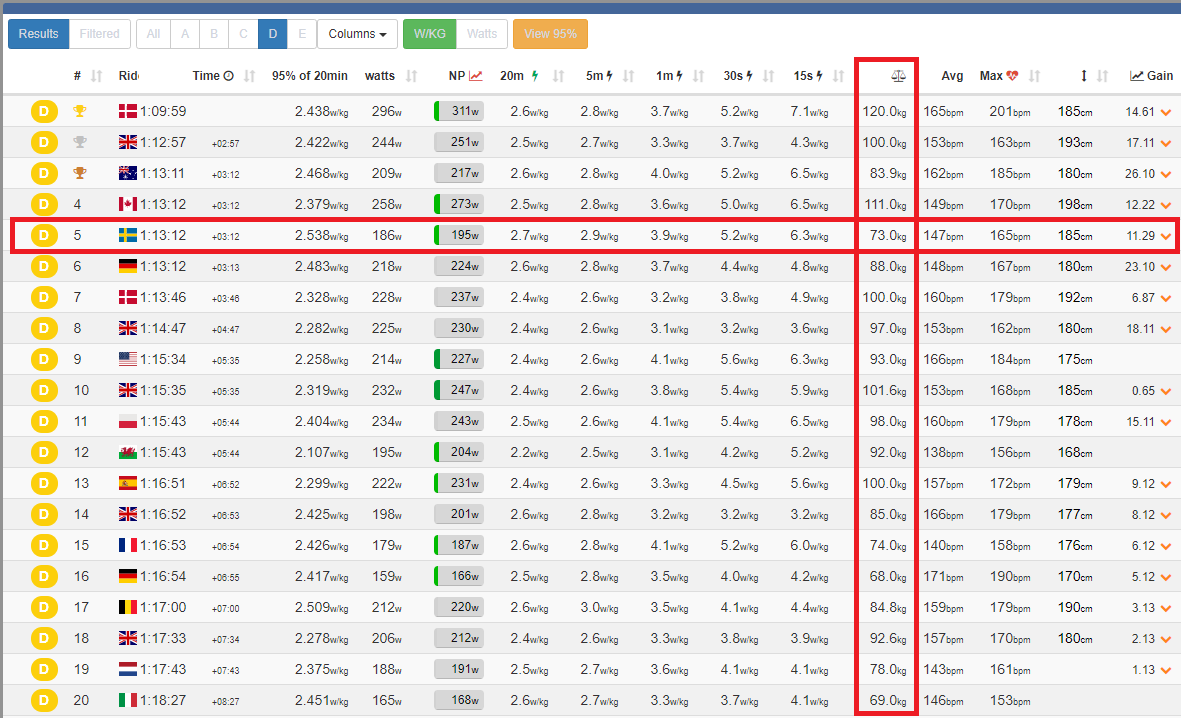 How to cruise Out and Back Again then? I think the easiest cruises would come in cat C. The reason is that the Volcano KOM would start just outside the second 20 min block for them. So they would have somewhat better opportunities to go rather hard in the climb in a sort of late post-20 min push, and then recover the average in the descent. But that is only the forward 20 min average covered, and there are good chances of getting your 20 min average starting at the foot of the climb recovered with the help of the descent as parts of it can be supertucked. If the tempo was only slightly below limit in the approach to the Volcano KOM, however, then there would obviously be the risk of raising the trailing 20 min average above limit.

Note: In this race I actually had to drop in the early climb to get my average down before 00:40:00. Then I went on a hard P20P push. It was probably what caused a best 20 min average on ZP slightly above limit and gave me an upgrade post-race (the result still stands though). Doing so helped me reconnect with the riders I later finished with though, so the result would probably have been worse if I hadn’t pushed. But be wary of your trailing average in that climb. It could easily rob you of your cheater’s license.

The Zwift KOM reversed, which is also included in this course, happens at a relatively safe distance in time from the Volcano KOM. So just be mindful of your average as usual there, no special treatment needed. Apart from those two climbs the rest of this longish race is pancake flat favoring the heavier rider. And for the heavy rider able to ride at limit for the duration of the race (essentially cruising, since this is a 60+ min race in cats C and D) not even the climbs will set him back.

As a final note, am I sorry about the upgrade? Not at all! I was about to write something about it a few days ago that it was probably about to happen soon and that I wouldn’t go out of my way to avoid it. Racing is my preferred WO and cruising is really bad for your fitness if you, like me, have the physique where high intensity gives better results than quantity, the long and slow. As if I would have the time anyway… So back to bottom cat C again where I belong right now. I will likely keep posting even so with course advice for the cruiser, more dissections of the Zwift racing system, etc. Oh, and a new data analysis festival – new and improved, smoking hot and shocking – that I have planned for when I get the time. But first that new lesson in Cheat School that I promised the other day.