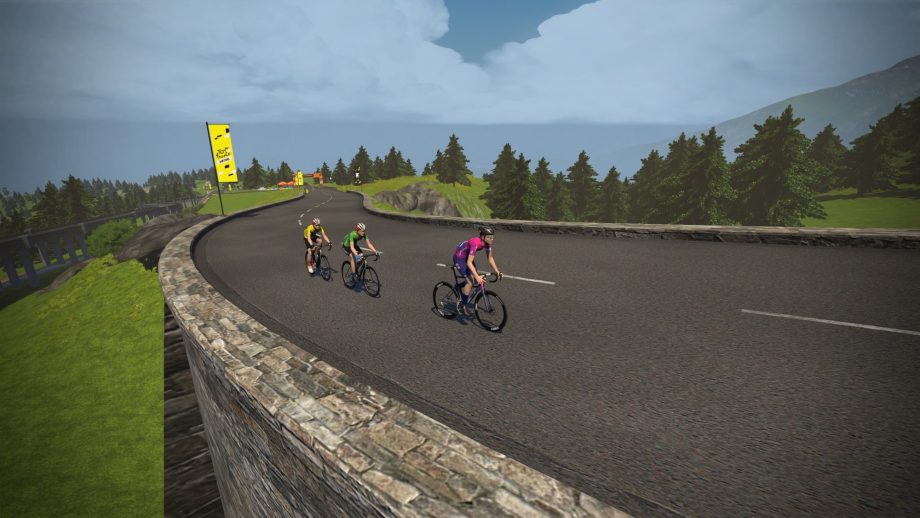 I concluded in the previous post, on cruising in the Virtual Tour de France, that Zwift races are necessarily brutal in their very nature.

That said, the men’s stage 5 up the Ven-Top route, the virtual Mont Ventoux, was indeed brutal. Perhaps a little too brutal…

I am not saying that there necessarily had to be something fishy about the front trio, but those W/kg numbers they produced were very high.

The break-way effort that lasted all the way to the finish line for all three of them (althought they got separated amongst themselves towards the end) didn’t last a full hour. Let’s keep that in mind.

Rather, the attack came 18 min into the race and they got to the finish line in about 45 min. That’s a 27 min breakaway. Roughly. At least it went on for more than 20 min. Let’s keep that in mind too.

And the pace of the break-away trio never settled to match that of the chasing peloton since the three of them were duking it out amongst themselves all the way to the finish. Let’s also note here that a large part of the break-away was spent pushing pedals at 7+ W/kg. Impressive!

Now over to something completely different. I don’t know if you have thought about this, especially now with the Olympics being postponed, but aren’t the track and fields world records coming in more rarely these days? How come?

Sports science and medicine have an explanation. Top athletes in sports that have you push Watts, whether cycling or running or skiing, and whether sprinting or going long distances, are close or even at the physiological limits of the human body. That’s the official explanation. Hence we are not to expect the 100m dash world record to be beaten easily, and if it is, then it won’t be by much.

I’m sure you have seen a power curve. If you haven’t, then here is one I st0led from the interwebz:

It’s someone’s curve, I hope they don’t mind. They look like this. A little different from person to person, some individual weaknesses and strenghts, but you will always see this downward-sloping curve with a bit of a hockey stick tendency.

On the Y-axis there is the Watt output of the rider. On the X-axis is a logarithmic time scale. The curve is like a scaling FTP report. Look at any time frame and you can find what is the maximum Watt that rider can produce over that time frame. The Watt for a 1h time frame is what we normally call a person’s FTP.

In Zwift the 5 min power is also very important, and you can find that too. On the far left is the peak power when sprinting, and it drops off quite fast over time. And if you remember, the way to calculate your FTP is by doing a 20 min max power test in e.g. Zwift and then multiply that number by 0.95 to get the max sustainable 1 hr power. It doesn’t always hold true, though, but at any rate your 1 hr max power will be lower than your 20 min max power by some factor.

Now, by looking at world records in sports such as track and fields or cycling (mainly track cycling), what sports science says is that you could infer an ideal power curve for mankind. The human body can only move so fast over a 100m dash. Likewise, the human body can only go so fast over the 1 hr track cycling world record attempts. I.e. unless we alter our genetics. Are top athletes at this limit already? Like stated above, sports science claims if they aren’t, then they are at least very close. Which could explain why e.g. Pantani’s record up Alpe d’Huez still stands since 1997 – a both fantastic and terrible year for cycling.

If you want to read more about what science says about cycling on the topic of max performance or perhaps about the physics of cycling in general, the physics Zwift’s computerized model most likely is based on, then I recommend this e-book. You can get it from Amazon or similar. It’s a really interesting read. A wee bit of maths in it – you can’t get away from that in physics – but explained in the simplest possible of terms.

Anyway, sports science claim that the upper human limit for the 1 hr FTP is 6.4 W/kg for men and 5.7 W/kg for women. It seems to check out. It does for track and fields. And no 1 hr world record attempt in cycling has ever crossed that line. Check for yourself! Anything above those numbers and you could fairly become suspicions. It would warrant a closer look. And an explanation of some kind.

All WT pros are genetic freaks. You cannot get to that level with determination alone, or you would run up against someone with the same determination as you but a better genetic disposition and you’d lose. WT pros have both the determination and the genetic underpinnings for performance at that level. But couldn’t it be possible that there are freak-of-freaks too? Guys that stand out even among the best due to some extremely unique genetics, one in a billion? It’s not impossible. It’s just much more likely there is another explanation to the results of such an individual, one such guy that really stands out. Or three.

Let’s return to the break-away in stage 5 in VTdF. I’m not sure what the ideal power curve would have to say about a 27 min effort, but it should at least not be higher than a 20 min effort. Turning the standard calculation to arrive at the 1 hr FTP from a 20 min test on its head, we could say that no rider should push higher Watts than 6.4 / 0.95 = 6.7 W/kg during a 20 min effort. I don’t have data on the average W/kg output for the trio during those 27 min. I sure would like to see it though. Maybe WADA and ZADA should take a look too. Just to be sure.

There are many ways to cheat in Zwift, like we have discussed in an earlier post. But there is also something to be said for Zwift racing. It brings visibility! You can easily hide EPO shots in coke cans in the fridge (in reference to a certain notorious rider in the past), but you cannot easily hide what EPO or blood bags or whatever bring you. Not in Zwift.

Well, not unless you cruise WT Zwift races…

UPDATE: During the later broadcast of stage 6 it was mentioned that the winner’s W/kg average during the last 30 min of stage 5 was 6.592.