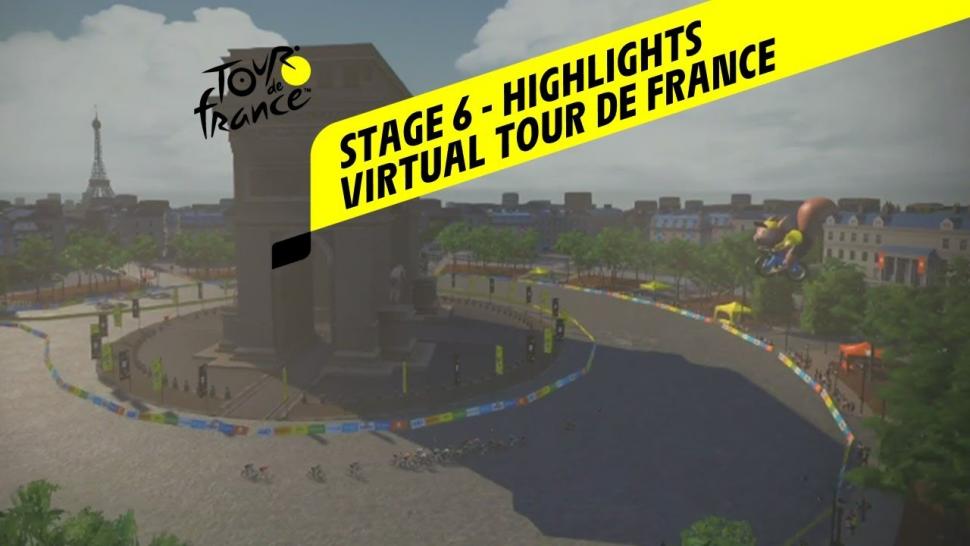 With the Tour For All previously as the debut and now with five of six stages completed in the Virtual Tour de France, the World Tour pro riders are beginning to settle in into a world the rest of us are already quite familiar with – the world of Zwift racing. So how are they doing? And are they cruising?

That’s two questions begging answers. Let’s start with the first question. A brief answer would be that the pros seem to be doing fairly well, considering the circumstances. What circumstances? Quite a few things.

First, many of them are still quite new or even completely new to the platform. Remember your first race? Right. That sort of confusion. The ‘Imma fire off this truck powerup and then I’ll hit ’em like a truck with this early breakaway’ confusion. You know the rest of that story.

Second, we have all met these non-digitalized roadies that have negative opinions on platforms such as Zwift. ‘Zwift miles don’t count!’ That type of guy. They take some convincing and first-hand experience, and that takes time. You can probably find guys like that among the WT pros too. Or should we perhaps say, you could even spot them when watching the broadcasts.

Third, while the Tour For All ran the pros still didn’t know whether there would be any normal races at all this season. At the announcement of VTdF the UCI had already presented the preliminary schedule for the autumn of 2020. Zwift races will likely not make or break a pro contract, but a real-life race might. Obviously, any rider will put priority on the real-life events that will hopefully follow starting in August. Their hearts are into those (and not Zwift races) and it has to be that way since their world and careers are built around them.

Fourth, in preparation for the the real-life events many of the teams take a break from scheduled activities to create a little sponsor publicity by participating in the VTdF. But in the hunt for marginal gains, which is the only thing you can throw at your competitors in the very level playing field of a drug-free WT pro racing scene, would you be willing to risk screwing up the training plan your expert coach designed for you so close to the events you are gunning for, by racing hard in Zwift, now that your team finally managed to get away to some training location in spite of everything this year? Probably not. Not if you won the TdF last year, aim to win in September 2020 too, and happen to be scheduled for participation in VTdF stage 4. You are most likely going to treat the stage as a recovery ride and your directeur sportif is going to tell you that it’s all right, as long as you show up on the screen for the fans.

Fifth, even if you were willing to go flat out for an hour during your high-altitude training camp as a WT pro, you might not want to. Not if you’re a big contender. You may want to hide your cards just a little longer. Or if you are participating and decide to make at least a half-decent effort, you may want to rip off that HR monitor that’s been growing into your skin over the last few years. Why reveal your strengths and weaknesses to your opponents when you don’t have to? It’s all so visible in Zwift, all those well-kept secrets!

So, considering all these circumstances and more, I’d like to think the pros are doing quite alright already. And Zwift is doing quite alright with them. It’s a joy to watch it all. And already at the start of the VTdF there were few if any draft powerups flying off the front, so things are definitely picking up.

So far so good. But next question, are the pros cruising?

Technically speaking, no. You can’t cruise if you’re racing in cat A+. And you certainly can’t as a WT pro. But it’s an interesting question nevertheless because it reveals things about the nature of Zwift racing. We’ll come to that.

In a way, you could say that Alaphilippe was cruising stage 5, for whatever reason, and I’m sure he had a good one. He didn’t cruise to cheat though. Falling minutes behind the leader is a terrible way to cheat if nothing else. Whether you still felt cheated on as an Alaphilippe fan, I leave to you to decide.

But then there is this other cruising tendency that you see sometimes in the WT Zwift races. It’s the ‘Let’s do this like we do it outdoors in this team sport’ tendency. Look at the women’s stage 3 for example. Parts of it looked like the average Tuesday night cat B race if you look at the W/kg numbers. Surely they could have gone harder, but for whatever reason the peloton settled for a moderate pace mid-stage. Bear in mind that nothing prevented the riders from sitting at threshold for the entire stage since none of the stages lasts more than an hour. It’s still not cheating of course, although we like pain faces on TV.

It was a bit surprising, though, since the female riders showed such aggression and willingness to suffer overall in Tour For All compared to the male riders. Why did they? It’s what happens if you have riders participate who can’t rest on any laurels, riders whose 15 minutes of fame only happen here and now. Like the women in cycling who struggle so hard to get a sliver of the attention the male events get. Or like your average Zwift racer.

If you want more WT pro pain faces on TV, I have what I believe to be a fool-proof recipe. Throw in a bunch of random, lone cat A+ riders in the mix and it will all sort itself out. Not too many, though, because that would only scare the pros away from participating. The pros may have the genetic advantage and more, but they sure aren’t 1-hour-puncheur specialists, any of them. In Zwift races, fear the zwifters.

Note that I am not suggesting that amateurs should have been invited to the VTdF. That is not the point. The point is rather to capture the essence of Zwift racing by contrast. Zwift racing will always be brutal at the front. It’s in the format, it’s racing on the breaking point, it’s in its very nature. And if the racing isn’t brutal, then something funny is going on. And then you may want to take a closer look at it to understand why.