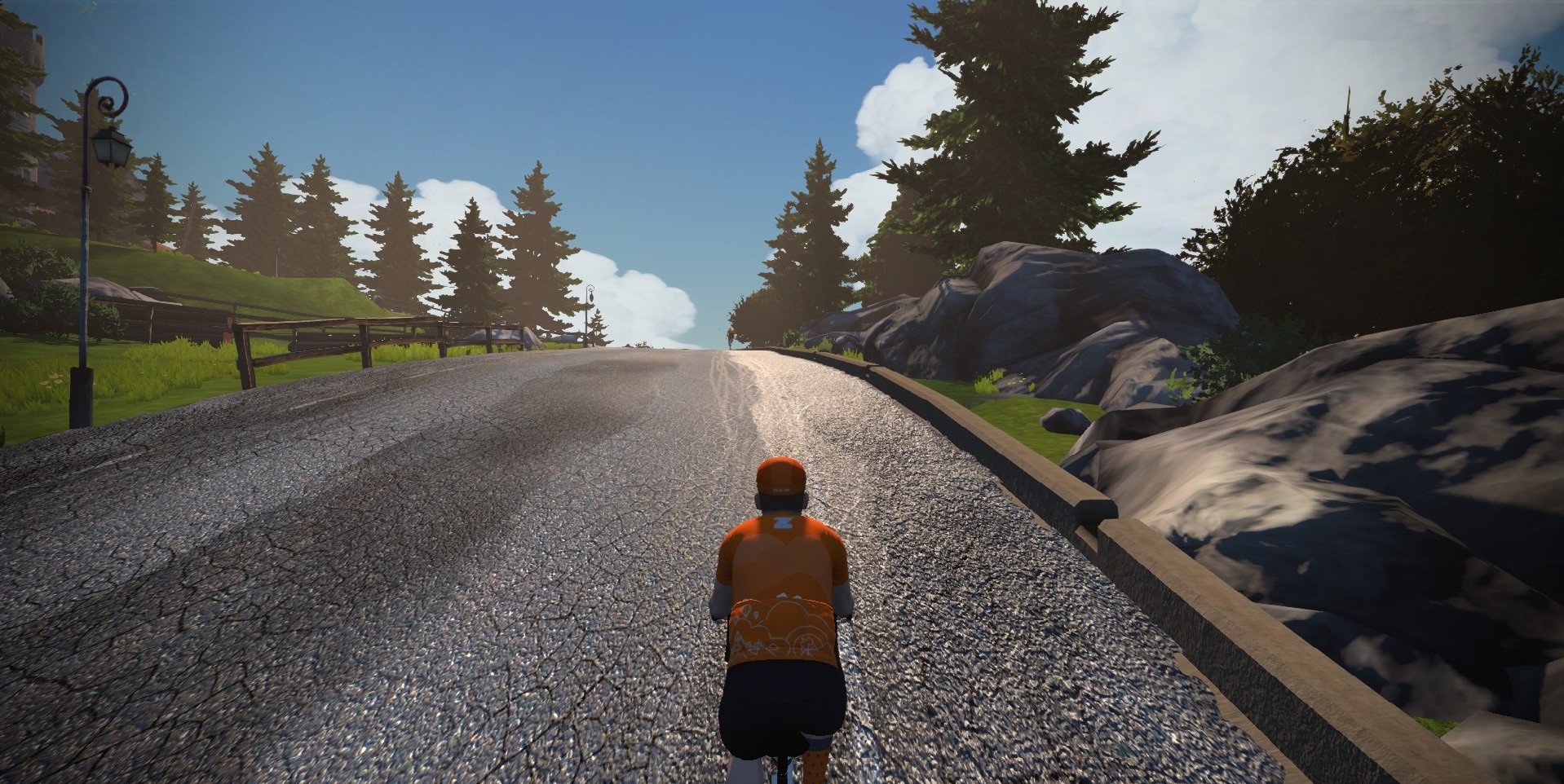 It was time to dust off the Tarmac Pro. I needed a Sunday cruiser workout that wasn’t too short. There happened to be two Road to Sky races close together on the schedule and I quickly decided that it would be the ride for me since AdZ happens to be one of my favorites. I opted for the race with the most signups, mainly because the other race had a known cruiser in the participant list. I figured better the devil you don’t know. It’s more fun that way.

I’m only cruising “virtually” until the end of month, which actually makes me a sandbagger in cat D since ZP pins me as a cat C, but I did try to stay within cat D limits as usual. Anyway, this would have been an extremely easy race had it been something like 2 Oct. With ZP showing 2.45 W/kg afterwards and with 10 min on the ZP winner according to the ZHQ race results, it would have a been a rock solid gold.

10 min? How can you win Road to Sky by 10 min in a race with a fair amount of participants? Well, there are reasons how this came to be. For starters, the ZP results list only shows one single eligible finisher (who thus was defaulted the gold)! I came in 6th according to ZHQ. Mr Gold did a 3.6 W/kg and Mr 5th did a 2.8 W/kg. Sandbaggers, all of them.

Oh, and perhaps I should show you this too:

This is the signup list on ZP from less than 10 min before the start. As you can see there is only one ZP registered participant who isn’t joining the wrong category. One of the others has even done a sub-60 AdZ in the past!

You can’t get a fair race in Zwift these days. It just doesn’t happen. If we are to get a bit philosophical here, though, you could perhaps say that from a utilitarian standpoint Zwift is actually making the right choice not to scrap their crappy cat system. I mean, look at it! Out of 10 signups, only one wants to race in his category. A whopping 90% want to cheat. So by still offering the opportunity to cheat, Zwift is actually maximizing happiness in cat D! It is clearly better to make 90% of the participants happy at the expense of 10% rather than the other way around. This is pure rationality! Or… wait a minute…

I think there is a reason why we see such an unusually high proportion of sandbaggers in this particular race though. It’s related to what I call the Sprint Race Catapult that comes with the W/kg cat system, only from the opposite end sort of. (You should read the post in the link if you don’t get the point.)

Some of the cat C’s are probably competitive, meaning they could actually have a shot at the podium in a more standard format race, like a 20-30 km race on a semi-flat route. But Road to Sky takes a lot more time to complete and these guys won’t be able to hold their 3.2 W/kg for that long. They might also be used to punchier races where you can hide in the draft between punches. So with their frail egos they prefer to join cat D instead, so that they don’t expose their suckiness. What if anyone saw that they could only land a 2.9 W/kg up the Alpe! Oh dear… Best join cat D! Anyway, that’s my theory. Only God knows what goes on in their minds.

But I didn’t get much competition in the cruising, despite this starting field. Half of them just went straight sandbagging instead. It’s probably the format. Climbing races are a little different. They are also ironically much easier to cruise than a flat race.

What is the optimal way to cruise Road to Sky? I don’t have data to support it, but my hunch says you should treat it like a TT race as far as possible. I doubt it would be a winning strategy to go over limits in the approach. There would still be time for you to make your first 20 min average W/kg drop as the climb starts, but you wouldn’t really want to have to slow down further at the point where you are already starting to go slow.

Instead you should probably aim for an effort on the cat limit, but getting draft is important here. It might be worth it go under the limit a tiny bit if that is what it takes to get draft. But if I had to drop from a front group of sandbaggers that pushed too hard for my average, I still wouldn’t want to slow down too much in order to let myself get caught by a slower group from behind. If you will get caught (and chances are you will if you drop solo and the pursuing group is large), then you might as well let your average drop in the approach and then recover by going over limits at the foot of the climb. But ideally, you get into a group early in the approach that has you going on the limit all the way to the mountain. You want to get there early but not pay too high a price for it.

Once the climb starts, since you don’t get that much benefit from drafting compared to a flat race, you should strive to keep an even pace. Don’t try to drop people the moment the climb starts. You are playing the long game. You are better off staying on the limit all the way to the finish while monitoring your 20 min average W/kg.

As for your average, it makes more sense than in a flat race to see the race as just a number of consecutive 20 min chunks. Once you complete one chunk with an OK average, you just start the next and don’t look back. You don’t have to worry too much that what happens in the last 10 min of the previous chunk will spill over into the next, because you will strive for an even pace and won’t be punching much anyway. You had to let slip a heavier rider in the approach? He might already be heading for a DQ. but if not, then reel him in slowly instead of trying to bridge fast. You have plenty of time. Avoid sudden movements in your average.

What is going to happen to anyone who isn’t cruising, especially during the winter when most Zwifters are on an exclusive Zwift diet with no long outdoor rides, is that they are going to start dropping off in pace after no more than 55 min. And a few minutes past the hour they might need to shift their gear range a tooth or two if they are to stay on a level RPE (essentially threshold). If you are a high cat B or better, then you might not reap much benefit from them dropping off since the total finish time will be too short, but otherwise this will be the moment when you start catching guys in front of you. Because, as opposed to them, you won’t have to slow down since you are cruising. Your HR will start to rise at the same time as they drop off, but there will still be plenty of room in your HR diagram before you hit the red, so you can afford to keep the pace up.

Actually, you might catch others long before that. Surprisingly many riders in C and D don’t know how to climb the Alpe efficiently. They shift gears way too little, keep a bad cadence for the situation, try to recover in corners and may instead start to hammer a climb section inexplicably. And then soon enough the balloon bursts, whether they are actually toast or just demoralized. The end result is the same regardless.