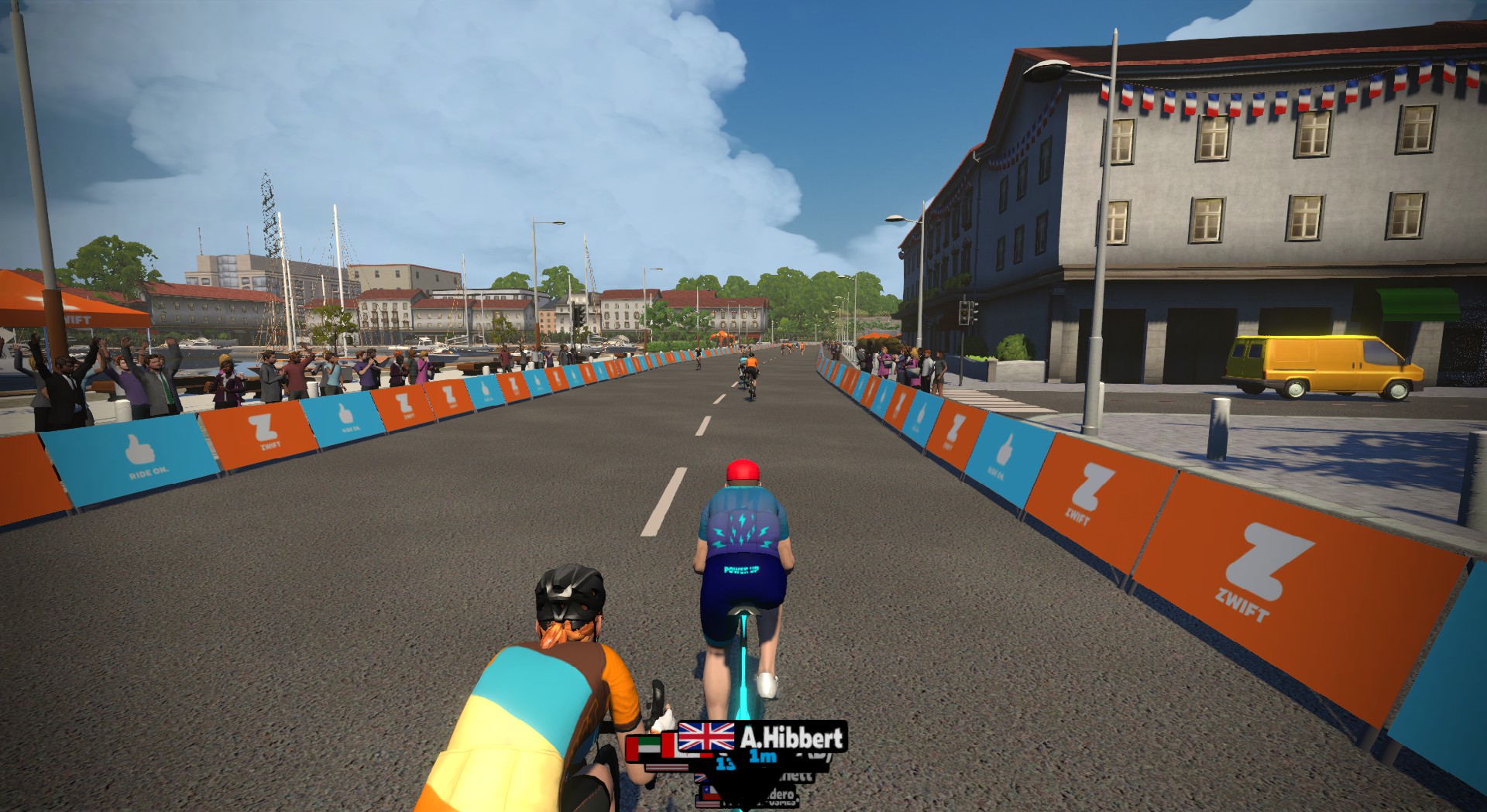 Summer vacation drew to a close and now I’m in the city again with days that grow shorter and over 30 min to get to roads even remotely worth riding. And so I’m back in Zwift on weekdays. Time for some cheating!

I noticed that my last little screwup in a race was 1 Jul. Well, it wasn’t even a race but an official group ride and ZP picked it up. I got caught on the Watopia PD speed camera doing 2.8 W/kg. But I have served my sentence on 1 Oct. Or should have. We’ll see, because my current 90 day top 3 average doesn’t actually correspond to activities I have participated in. But anyway, I thought I’d prepare for an autumn of intense, relentless cheating. And for that I need a “legitimate” downgrade. Thus I needed two more races staying within cat D limits.

First was the Namibian Race League of 23 Aug. I had just recovered from an infection with fever the day before. Not covid this time but bad enough to call in sick. Safe to say, I was in pretty bad shape right after and so the race actually turned out to be fairly tough although I did hold back somewhat.

Since I was set on monitoring my average Watts closely, not to let it slip beyond 187W at 75 kg, I decided to go “easy” at the start (meaning hard instead of the standard insanely hard). So I let a front group or two of sandbaggers go straight away.

There is always the risk that there is a piggy-backing legit rider on the wheels of the front group frequent flyers. Or a cruiser. If it’s a cruiser, then that’s a risky strategy. He is then banking on the group slowing down considerably mid-race, or he runs the risk getting a DQ or even screwing up your categorization. It can pay off though, and if you let a guy like that go, you won’t catch him. But a legit rider you may have to let go. The hard part is telling which is which. In this case, though, there was no doubt about it. I would let them go.

After the start I decided to drop two more times ending up in chasing groups. You start with an initially very high average Watt. It will drop over the course of the race (I have no means to measure a semi-rolling best 20 min, so I have to play it by ear partly, relying entirely on the total average). It just has to drop enough over time and it is not always easy to predict whether the drop rate will be enough.

In the final climb I decided to start sliding down immediately, although I ended up also catching up with a few riders who went too hard at the foot of the hill. I was already at the target 2.5W/kg I had set in my mind and just tried to stay there.

This so-called effort, if I had been downgraded already, would have sufficed for a bronze. It would have been hard to improve on the result further, though, at least on a day like that. The winner was a heavy-weighter with a private Zwift profile (and thus no HR data) and a 45 sec lead on the runner-up. Go figure.

The second race, The KISS Underdog Series of 23 Aug, 3 laps around Champs Elysées, was a bit funny in that it turned out so soft and mellow. I had opted for a 2.3 W/kg to pull the 90 day top 3 down a bit to get some leeway in October, so I was nowhere near VO2Max at start. I went really slow and just stepped on it briefly from time to time to bridge early gaps forming. I also decided to race as a C for a change, so I was only really cheating in my imagination.

Some D riders slipped away one by one during the first third of the race, looking fairly legit. But I had an average to protect, a low one at that, and had already accepted a placing way down the imaginary D field.

Soon enough a nice group of maybe 8 or so riders formed, mostly D but with some other C rider too taking it slow. The group was going well below cat D limits and I was sure we were quite far down the field by then.

The group kept together and I kept my Watts low and even, staying in the draft. During the first part of the third lap the group became a little antsy. No surprise there. And also no surprise than things also calmed down a few km before the finish, as the group was preparing for the final dash.

Since my average Watts had dropped so low there was a little room to play, so I had decided well before the overpass on the final lap that I’d hammer the climb and then just keep stepping on it until the finish. This was my first time riding the course but I had noted the distance to the finish from the overpass already on the second lap.

Appearing as a blue dot in a clutter of yellow dots on the minimap, there was no incentive to chase me down of course, but I’m pretty sure I would have pulled it off even as a yellow dot. I dropped the group hard and kept at it almost all the way to the finish. Doing so I passed several D stragglers ahead of the group I broke off from. On the final stretch I took a quick breather behind one of them before beating him in a sprint that he initiated. This was, surprisingly enough, the ZP legit silver guy. So come October and this could have been a “legit” silver. All while the Watopia PD looked the other way. But the Law of W/kg is just! Right?

The winner in cat D? Well… have a look at the HR graph yourself. I won’t comment on it. But I can’t refrain from commenting on the winner of cat C in the same race. Even though I have stated before that you will find that cruising is very common once you start looking, you will nevertheless have a hard time finding a more ridiculous display of cruising than that. Absolutely priceless! And the Watopia PD just looked the other way.

The Perceived Effort of Race 2 and a Comparison

So how was the perceived effort in this second race? Well, I’d call it light excercise by my Zwift frame of reference. Remember my How to Spot a Cruiser post? Remember the example HR distribution graph, taken from a notorious cruiser? This is what my own graph looked like. A Zone 3 effort. This level of effort is piss easy. It is racing most foul.

I refuse to be beaten by a “legit” Zone 3 guy while pushing a high Zone 4 in a race in the lower categories. And so should you.