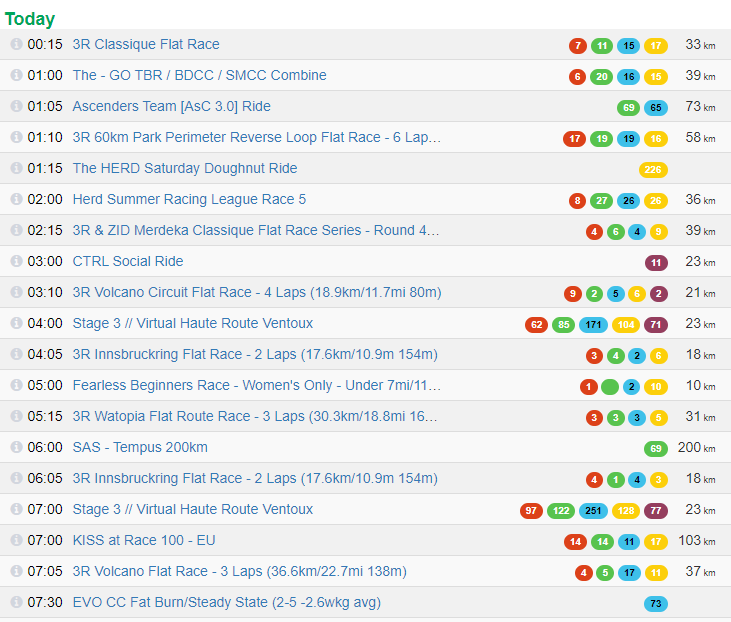 As a follow-up to the last couple of posts about cruising and the weird effort limits the W/kg category system imposes on us, I decided to do a little pseudo-scientific study of the racing in Zwift.

Previously I have claimed that the W/kg system favors making less effort than competitors in a race, if the objective is to win. If you haven’t read the last couple of posts (you should read all of them), then you might ask yourself, how does that make sense? That couldn’t possibly be right, could it? All else equal, sports are won by people making more effort than their competitors, isn’t that so?

And the awful truth is that, yes, in all sports except Zwift this is indeed so. But Zwift is different, I have claimed, since it has a uniquely weird categorization that imposes an upper limit to your power output in categories B-D – regardless of your perceived effort, I might add. This would then mean, if I am right, that ideally, if you are set on winning races in Zwift, you would race in a category you are too strong for but still make sure to stay within the category’s upper W/kg limits. You would then not get disqualified by ZwiftPower but still be able to beat competitors in climbs, sprints, surges, what have you. In other words, you would likely win. (Unless you are up against several other guys like you, i.e. several other cruisers, whether they cruise the race intentionally or not.) And not only would you likely win, you could also repeat this indefinitely. You would keep winning over and over and still be allowed to stay in your category.

So let’s put these claims to the test. I took a random day (today, Sun Aug 17) and went through all the races from midnight to midnight to see if winners did indeed make less effort than the others.

The idea here is that the occurence of a winner making less of an effort compared to others becomes apparent by studying HR distribution graphs on the Zwift website. If e.g. someone wins a race spending most of it in HR Zone 3, yellow, and does so against a runner-up who spent most of the race in Zone 4, orange, and both are at or close to the W/kg limits of the category, then that indicates that the winner could go harder still, just like the runner-up. Only going harder might push the winner above limits and result in a DQ or even a category upgrade. So the winner wins by being the strongest and by making less effort.

I went through over 80 races in those 24 hours and studied cat B. (We all feel we know cheating is abundant in cat D, right, so what about B?) Of those 80 races about half of them had to be discarded. I set a lower limit of at least 5 eligible participants in cat B (according to ZP) because I wanted to make sure there had been at least some kind of dynamics during the race. The far most common reason for a race to get discarded was indeed lack of participants. But there were also some age category races and some others special cases that did not lend themselves to a comparison between cat B riders.

For a race to qualify as having been won by someone making less effort than others I looked excludingly at the podium, even though I have claimed before that cruisers are over-represented not just among winners but the entire podium. This is because there are often more cruisers than one in a race, I have claimed. So we should actually look beyond the podium, but I had to simplify a bit.

So, anyway, the heuristics here was that if the winner made significantly less effort than either of the no 2 or no 3 guy, then the race would qualify as having been won through less effort.

Doesn’t it distort things comparing one guy to two? Wouldn’t on average at least one other guy have made more effort than the winner just by random chance? Well, is that your experience from other sports in the categories below the top one? Also, you need to consider how the comparison was made. To qualify as less effort, it had to be significantly, visibly so. I looked at in what zone(s) most of the time in race was spent and if there was an obvious difference compared to the rest of the podium.

It is, after all, rather conspicuous and intriguing if the winner sits mainly in Zone 3 if the no 3 guy races on the threshold, don’t you think? How would you explain that? All on the podium are at the top of the category but the winner is not the one having a near-death experience? (Keep in mind the upper W/kg limit here, which does not exist in other sports where categories are based on past results rather than, weirdly enough, past power outputs.) I would then say it clearly supports my claims.

It should be added that in cases where a rider did not use a HR monitor, I have counted that as less effort per default, regardless of whether it was the winner or any of the other two. So in one case there is a race where the winner, although he did seem to slouch around in Zone 3 mainly, was up against two others with no HR monitors and thus that particular race was not deemed as having been won by someone making less effort.

Of 43 eligible races in cat B on this date, 30 were won by someone making less effort than either or both of the no 2 and no 3. In 13 races the difference in effort was not significant or the winner made more of an effort than the others.

If you want to win a Zwift race on ZwiftPower, the odds speak strongly in favor of making less effort than others in the front group. Don’t push yourself too hard! Relax. Cruise. And you will likely win.