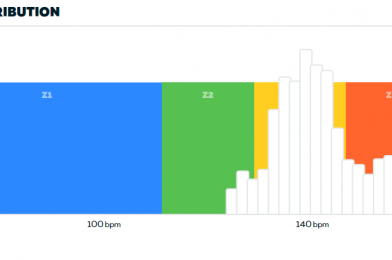 How do you spot us cruisers? As has been discussed in a previous post, you don’t. Not during the race. You may have your suspicions, but you can’t tell for sure until the race is registered with Zwift or ZwiftPower.

So what do you look for on those web sites? The easiest way to catch a cruiser is to look at the HR graph and look for profiles that don’t look like your own. You are looking for riders who had a much easier time in the race than you who did put in a lot of effort.

There is a grayscale of course. Cruising isn’t black and white. But sometimes it is ridiculously obvious. I will show you one such example.

Below are two riders participating in the same race. We will keep them anonymous for the sake of decency, and it really doesn’t matter. This is from just an ordinary race on an average weekday, just a random race on the daily schedule. One I didn’t participate in myself, I should perhaps add. You can find plenty of examples like this if you look for yourself. Cruising is common. Almost every race has cruisers.

None of the two racers did a spindown after the race, so there are no extra km’s at low intensity to mess up the pattern. There is an age difference but not that large and none that would really justify the winner’s choice of pace. Both produced the same average W/kg. There is a slight weight difference between them, the winner being the heavier guy, but it isn’t a big difference. Both of them are fairly heavy.

First, let’s look at this guy:

This was a flattish race but with some short punchy hills, medium distance, under the hour. This is not a flat out effort. You can see that there have been moments where he was able to draft in a group that didn’t go full speed all the time (Zone 3). But boy, did he work hard! Look at the peaks! He spends way more time in the upper Zone 4 (orange) band than anywhere else. That is on the lactate threshold. He is basically doing an FTP test while racing, and you know how pleasant that is.

As if that wasn’t enough suffering in itself (I can picture his pain face throughout the race) there is also something else. Look at the time spent in Zone 5 (red). That’s VO2Max or worse. Now, the zones can’t always be trusted. Not everyone fits into the Coggan model perfectly. But it is probably still safe to assume that he was indeed in the red for quite some time, actually longer than in Zone 3 (yellow), tempo pace. He probably had to fight very hard in climbs to stick with the others in the group.

I don’t know about you, but to me, given a category system with effort limits, or actually, given any system, this guy looks like a deserving winner. Will of steel. He sacrificed a lot to get to the finish line. That’s a worthy winner. Only it wasn’t enough.

I would guess he lost the sprint big time, because he crossed the finish line a couple of seconds behind the winner. Actually, he came in 3rd.

Now let’s look at the winner of the race, according to ZP:

Can you see the difference? This guy spends most of the race fairly comfortably in Zone 3 (yellow) and even manages to squeeze in a little green there. This mass of yellow is what you get on an endurance ride. He is racing in endurance tempo and then pushes up some hills every now and then.

At times he does push hard, probably in climbs or other situations where he wants to decimate the group and drop people left and right. Two of them, at least, he couldn’t drop (for fear of going over limits), but he probably tried to wear them down. Cruisers do that in races. You try deliberately to hurt the others in situations where you are strong. And this guy is obviously strong all the way. So cruisers get to pick and choose when to bring out the hammer.

Are we sure he is a cruiser? I have looked at this rider’s other races and I seriously doubt there is a natural explanation, such as a heart condition that would motivate not going too hard. I have seen him work harder than this in e.g. workouts and apparently he survived. It should be noted, though, that this guy is a winner. He has lots of podiums on his ZP record. And I assume he doesn’t intend to leave his current category anytime soon.

We have to remember that Zwift wants this guy on top, rather than the bronze guy. It’s part of their system and they have had all the time in the world to change it. But they don’t. They want him to win. They believe it is revenue maximizing to cater to the cheater before at the expense of the others in the race. You have to leave your moral judgements behind. This is Zwift! It is what it is. It is the place where the oversized fish eat smaller fish in an undersized pond. I will eat you next.