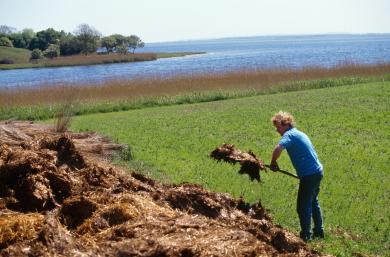 Sunday is the day when a lot of Zwifters go on longer endurance freerides. Some choose to join longer races in a lower category instead. Far from all of these sandbaggers are out to snatch a podium. They may grow restless after a while, however, since virtual endurance rides, although essential in many training plans, are terribly boring and since racing other people is much more fun.

Yesterday’s race was one such Sunday race on the longer side. This was the shortened Petit Boucle of 45 km, but with a climb in the latter half it will still take cat A just over an hour to complete. I doubt you could go any faster than 1:15 in cat D.

It wasn’t a well-attended race but with the increased subscriber count there were still a decent lot at the start line. Only a minority were registered with ZP and a majority of participants, registered or not, were sandbagging.

With a race of this length lasting over an hour a cruiser does not worry about legits at all. It is just other cruisers, particularly the heavy ones, one has to keep an eye on. This was rather easy this time since there was just a handful of names that had to be watched. And with only four legitimate finishes in the end according to ZP (me being one of them) this was an easy gold (14th out of 35 on ZHQ).

So let’s forget this race and talk about Petit Boucle instead. It is not a difficult course to cruise at all. At a quick glance the course profile looks potentially complicated but it really isn’t, at least not in cat D and probably not in cat C either.

Most of the course is flattish with just some low-gradient rollers strewn out here and there. There are three climbs, at least if you look at those websites that detail the Zwift courses, but I beg to differ. I would call it 1 ½ climb.

First, there is the Aqueduct forward climb, which is very short and goes into the second 20 min block, and so it is not a problem. Second, there is the Petit KOM, which is a mid-range climb, although I would rate it a little less taxing than Box Hill. Then towards the end there is the Aqueduct climb again in reverse, which isn’t really a climb at all since you gained most of the elevation already earlier in a 2-3% inclination stretch not associated with the actual climb itself.

The Petit KOM could have been tricky. However, it so happens that it fits nicely into the third 20 min block in cat D and probably in cat C too. Since it is a long race, chances are that the last half of the second 20 min block had your group slow down a bit and go under limit. So even if you are forced to avoid getting dropped or elect to push yourself in the Petit KOM, you should be able to accomodate those extra Watts in your 20 min trailing average without too much difficulty. In fact, if the start was hard it might even be difficult to go over limit here with everyone being a bit toasty – it all depends on how low you cruise.

Bear in mind, though, that the descent is not quite as nice and steep as the course profile on some site would have you believe. It can actually be surprisingly difficult to get into supertuck in the descent. You will get the chance to get some CO2 out of your lungs if you went hard in the climb, yes, but the net effect on your average may be smaller than you hoped for. So don’t overdo the climb unless you have a solid plan for keeping your average within bounds.

In an everyday race the rider texture in the last 15 km after the Petit KOM is likely to be rather fragmented. You therefore don’t have to worry too much about finding draft. It is not out of the question to treat those last km’s as a threshold interval (even though it is not it may still feel that way at that stage) and convince yourself you are Jensie. You might not be as stuffed with chemicals but you are a kroozer, ja? So it evens out.

There is one tricky thing about Petit Boucle, though, which I would like to address. It is not something particular to the course really but rather something pertaining to its length. In a longer race like this, on a course that isn’t pancake flat, there may be a whole lot of fighting for position at start. Assume you are a completely legit top cat in C, not an “Almost B” but a solid C, only on top. You don’t podium much, if at all, because the cruisers and heavies do that for you. But you can produce a 20 min average not too far from cat limit. Now, if the race is even half as full of sandbaggers as this race was, particularly if the number of potential legits is a little bigger than in this race, then you might get dragged into these position wars in the first 10 min. And even if the group you are in halfways through the first 20 min block slows down a bit, it might still not be enough for your average to recover in time for the second block. You could risk a WKG, which would be both ironic and unfair since you are forced to spend the latter 20 min blocks well below cat limit due to fatigue. Thus, even a legit rider needs to learn how to cruise, or you risk getting upgraded and then race mostly below your new cat’s W/kg span. It’s a shitty cat system, I know. And Petit Boucle could be one of those courses where you get more than a whiff of the poo. So stay safe in sunny virtual France, whatever staying safe means to you.

We will take a closer look at the first 20 min in an upcoming new lesson in Cheat School. Stay tuned.