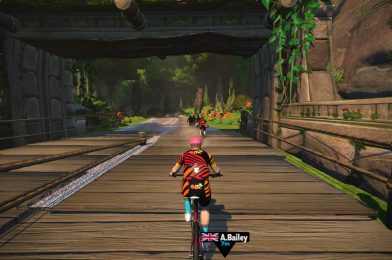 I got the bronze here and I am satisfied. It wouldn’t have been possible with a higher placing. I will explain why later on but essentially it was because of my low weight.

This was a tricky race on a very simple course. The tricky part was the lineup. Since this is a big ZHQ event it attracts a lot of attendees even on a Friday night. I noticed 2 min before race start that the start list consisted of what looked like 50% sandbaggers and higher-cat recovery riders, and that was only on ZP. The bronze on ZP translated into 27th out of 89 in cat on ZHQ!

I also noticed in the ZP start list that there was a 7 year old Canadian child with a 3.2 W/kg 90-day average weighing in at 30 kg. If he finished, then there was no way I or anyone else could beat him since he falls under the low Watt–low weight ZP rules and can legitimately win even though he breaks through the performance ceiling in cat and rockets out into space.

The start was hardish but the front group soon slowed down and the second group bridged to us. Everything was nice and easy with a draft speed giving me a decent margin below cat limit that would surely let my initially high average tick down well before the 20 min mark. But once we hit the caves this kid does the smart thing. Or rather, you could almost hear coach daddy yell in the background “Go Charlie!” He suddenly started pushing 3.2 W/kg and went flying. Since the now enlarged front group consisted of quite a few sandbaggers the group was baited into following. A brilliant move! And well-timed. If there were any ZP signups among those who got baited, then they would be screwed. They would never get their averages down in time. I quickly decided to drop of course.

I expected more riders would be sensible enough to drop but apparently nobody checked the ZP signup list (a good sign, because all cruisers do). Or maybe they were sandbaggers all of them. I dropped into a sizeable group right behind us but even they seemed to be all sandbaggers and intent on catching up with the front group. So I dropped down further into some stragglers. Who were also sandbaggers and intent on catching up with the second group. And so on. It took a while until I found draft at a reasonable pace.

The group I landed in let me lower my average in time and with a nice little margin on top that I could use to catch up with riders up front in a post-20 min push once the first 20 min block was finished. I connected with a couple of riders in the push. After a while some others connected and we turned into a group of maybe six or so riders.

However, on the second lap I still had a Watt debt from the P20P to pay for and the pace was a little too high for my liking. So when the group started to chase down stragglers with 5 min left of the second 20 min block and with my average still 4% higher than my 20 min Watt limit, I realized I had to drop again. The only problem was this group contained the rest of the would-be podium, both of them significantly heavier than me. 1st would go over limit quite a bit in a way that I couldn’t possibly have matched without getting an upgrade. 2nd had 24 kg on me and I wouldn’t be able to compete with such a heavy-weight advantage either. Both seem legit though and if we disregard the Light Rider’s Curse for a second their placings were well deserved.

Some semi-dispersed riders right behind seemed to go a little slower and I dropped back to them. After a while we coagulated into a new group of 6-7 riders. I must have pissed off, among others, future 4th on ZP (who I noticed was a heavy as we went on) since I refused to take wind. I’m quite good at that. I’m glued to their wheels and there is no point in trying to shake me off. It won’t work unless they are sandbagging. And I absolutely had to suck wheel to lower my average in time for the start of the third 20 min block.

I let my average run past 20 min as we approached the finish through the caves. We had slowed down further and I built up a 2% Watt margin I would be able to use at the finish. Not much but it would cover a short push at least and I had saved an Aero powerup too.

The start list on ZP was hard to read with half of the participants, interspersed, being sandbaggers, but I was pretty sure my group only contained one ZP legit rider, the heavy guy I mentioned. If he decided to sprint at the finish just for the hell of it, then he would likely outsprint me and I wouldn’t even be able to try without risking an upgrade. This is a common problem for the cruiser. You will often not be able to sprint at the finish without screwing up your 90-day average, since you are often already on or very close to the limit. And even if, as in this case, you have a small Watt margin up to your Watt limit as you approach the finish, a 20 min average will rise horribly fast if you start doing sprint Watts. It is very easy to bust out in a sprint, so beware.

I pushed semi-hard some 400m out and popped the Aero. Some other guy I was half sure wasn’t on the ZP list went after me and I let him pass while trying to keep 4th behind me with an average that very quickly rose slightly higher than I wanted it to. Luckily, it seems the Wahoo app overreports compared to ZP (or maybe ZP underreports) so there seems to be a little safety margin built into my cheating setup. And thus I could both finish third and stay in cat.

But what about the kid? Well, 7 years is awfully young. If they have the stamina to last 2 laps around Jungle Circuit at all, then very few would have the attention span or motivation to sit through the whole race. In fact, as a parent I’d be slightly worried over a kid who did. On the second lap I saw him standing still by the roadside. Maybe his favorite cartoon had just started. ‘A’ for effort nevertheless.

So how do you cruise Jungle Circuit. Well, there really isn’t much to say. It is a very flat course. You just maintain your average and monitor the tactical situation basically. It won’t be the course itself that destroys your cheating dreams but, if anything, other riders.