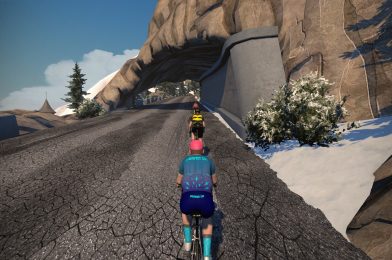 Road to Sky is by far my easiest cruise. It isn’t a particularly popular cruise, so the races are typically a mix of of just sandbaggers and legits. Further, the heavies only have a very small advantage there. They have the upper hand in the short approach and if they can make clever use of it, then they can get a head start in the climb that may be hard for a lighter rider to bridge without going over limits. But usually they don’t present the normal, often unsurmountable, problem for a cruiser on the lighter side of the scales. Finally, even a stronger cruiser, should you ever meet one on the Alpe, does not have much of an edge since the pace should be set as even as possible for efficiency – as long as you can stay at limit for the entire duration of the race, be it at 100 or 150 BPM, you are competitive. So essentially, when I cruise Road to Sky I expect to win. And I did, this time too.

The start was slow and the front group arrived at the climb a couple of Watts below my set limit average of 190W. Well, not quite the front group. There were three riders ahead, although within eyesight, who I was sure belonged to the sizeable group of sandbaggers that had signed up.

Once we hit the climb I just kept going at the same pace all the way until the finish. Like in the Lutscher CCW race two days earlier, this is a 1 hr+ race in the lower categories, meaning the legits simply can’t keep up. Somehow this course also seems to be way more demoralizing to many participants than the Lutscher. Which is kind of funny to me. Sure, it’s a little bit longer, but it’s way easier on the legs and the heart. You just keep going steady. TT style (unless you, quite unlikely, really need to drop someone). Piece of cake. And again a huge lead on the runner-up. Note that 14 riders got DQ’d or UPG’s, more than actually finished the race within cat limit. People always go too hard in the early climb. And those were just the ones registered on ZP… Like I said, you rarely face skilled cruisers on Road to Sky, playing the German board game known to us as Zwift racing.  And the legits can’t last at 2.5 or 3.2 or whatever W/kg for a race that long. Hence the wide time margin. It has absolutely nothing to do about heroics or physical prowess. It’s just plain cheating, slipping into the blind spots of an idiotic race rule set that should have been reworked years ago. 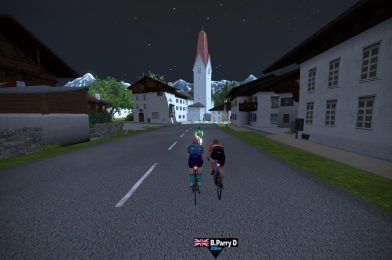 Lutscher, especially the counter-clockwise version, presents an interesting challenge for the cruiser who doesn’t fear a climb. It’s much trickier than e.g. Road to Sky, which is a very straightforward climb.

The approach is so short that it isn’t quite critical. Still, you don’t want to fall behind too much at start. So the first challenge is to find a group with a suitable pace to draft behind. You can go a little over limits here but remember that you need to compensate for it later in the first climb during the latter part of the first 20 min. Sandbaggers and inexperienced cruisers will fail to do so and get snuffed out unknowingly already in the first climb, ZP will tell them later.

If you cruise in cats C-D, then the first 20 min block will occur well before reaching the first KOM portal. This means that while you may have to compensate for a hardish start by slowing down in the first climb, a margin below cat limit, then as soon as the race clock hits 00:20:00 you can do the P20P, the post-20 min push. But not only can you suddenly afford to go back up to cat limit in your climb. You can actually really push it and go above limit.

The second 20 min block will end in or close to the descent, where you will aim to reach 58 kph ASAP to start supertucking and basically do 0W as much as possible. However, remember that if you push it too much once the second 20 min block starts, even though the descent will take care of the average for the second 20 min block, your trailing 20 min average cannot quite tolerate a super high effort, in case you cruise well below your true capabilities. So if you had to end the first 20 min block at, say, 0.2-0.3 W/kg below cat limit in the first climb to compensate for the hard start, then you can only push the first part of the next 20 min so hard. In e.g. cat D, you probably shouldn’t average higher than 2.9 W/kg (before the 95% recalculation, so effectively something like 2.8 W/kg).

The third 20 min block, depending on your cruising cat, may involve both the descent, the flattish stretch before the second climb, and the first part of the second climb. The descent is going to make your trailing 20 min average plummet, so you can afford to push after that. It will be up to you whether to start pusing already on the flat, if that makes sense considering the race situation and your rider characteristics. If not, then you hold a little and wait until the climb starts and then begin dropping people.

If you are cruising cat D, then the race will continue into a fourth 20 min block although incomplete. Just be mindful about your trailing average. If you pushed too hard towards the end of the third 20 min block you will have to compensate for it during the finishing minutes, which is far from ideal.

Remember that when cruising lower categories, this is a +60 min race. There is absolutely no way any non-cruiser could keep up with you. By definition their FTP should be 2.5 W/kg or 3.2 W/kg tops. Unless they somehow defy the laws of sports physiology they cannot stay at that level for over an hour, and since the ZP FTP grossly overstates a legit rider’s true FTP, they will not last in the final climb. So the only opponents you will have are cruisers and sandbaggers. Try to tell the difference.

I am going to need several more runs before I can say I have perfected the Lutscher. But it was an OK run. I was caught off-guard by a late entrant that I wasn’t aware of. I was certain (mistakenly) that he wasn’t ZP registered and never worried about him. Being a bit heavier than me and also going slightly over limit, whereas I made damn sure I wouldn’t, he slipped away with quite a margin during the final block. I’m not completely sure I could have beaten him without getting a DQ. Being an ex-cat C rider like me but with a weight advantage he could make better use of the descent and the flat. He was very efficient. Still, I got a silver and am quite content.