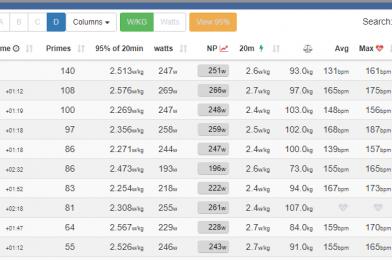 With a slow week in the Build Me Up program for a change, I thought I would add a race, starting in my old cheating pen. I had set my eyes on the new edition of the SZR iTT series the day before, which would have taken me up and down Bologna and then up again on a TT bike. It would have suited me fine at 73 kg and capacity to do the whole race at WKG limit (although admittedly at a rather high HR as things stand now). But things went a little upside down in life and I lost the opportunity. Losers can’t be choosers, so I signed up for the new crit race series the day after instead, knowing full well in advance it would be awfully hard or even impossible to accomplish anything in it.

There’s not much to say about the race really. I went out hard-ish at start, then stayed around cat limit trying to get as much draft as I could with still freakishly high average Watts dropping all too slow, had to drop from groups going at DQ pace a couple of times. And, being a little rusty, in the last minute had to basically stop pedaling in panic to avoid an otherwise inevitable UPG.

Then once we hit 00:20:00 on the race clock I was free to do the… let’s give it a new cool acronym… the P20P, the post-20 min push that I described in lesson 5 of Cheat School. The idea is that the first 20 min of a race is usually the period where your Watts are the highest, especially since the first minutes typically involve unsustainable Watts way beyond cat limit. So the latter part of those 20 min are shaky since you need to get your average Watts down considerably to pay for the early high Watts or you get a DQ. However, as soon as you are out of the first 20 min block, considering the latter part of it was spent clearly below cat limit, you are again free to push hard, at leat up to cat limit again or even higher if you can compensate for it later or if, as in this case, the race will finish somewhere between 20 and 40 min.

Anyway, I gave the P20P a go but didn’t really put my heart into it since the race was obviously already hopelessly lost by then. I ended up 6th but even so only due to primes. Now, the classification is an obvious example of a point I have raised many times before. Heavy riders, relatively speaking, enjoy an advantage in cats B-D. Depending on the scenario, this advantage can even be so huge as to make the race theoretically unbeatable by a light rider. Let’s have a look:

The winner and the runner up went slightly over limit which might screw up their 90-day average. Mr Bronze could roll over the finish line at a comfortable 2.269 W/kg, though, and the reason for this is his weight. The average weight of the top 10 (me included) is over 94 kg, i.e. more than 20 kg on me. There was absolutely no way I could have kept up with the podium in this race. I would have gone over limit by a mile. So with a lineup like this you cannot place well as a light rider in a crit race. It is a mathematical impossibility and you are not allowed to do your best accoring to the rules as doing your best will earn you a DQ. You simply have to hold back and let the heavies win. Crit races are a no-go for light riders. And no, the presence of the Green Cone of Stupidity (Zwift trademark) wouldn’t help here. Sorry.