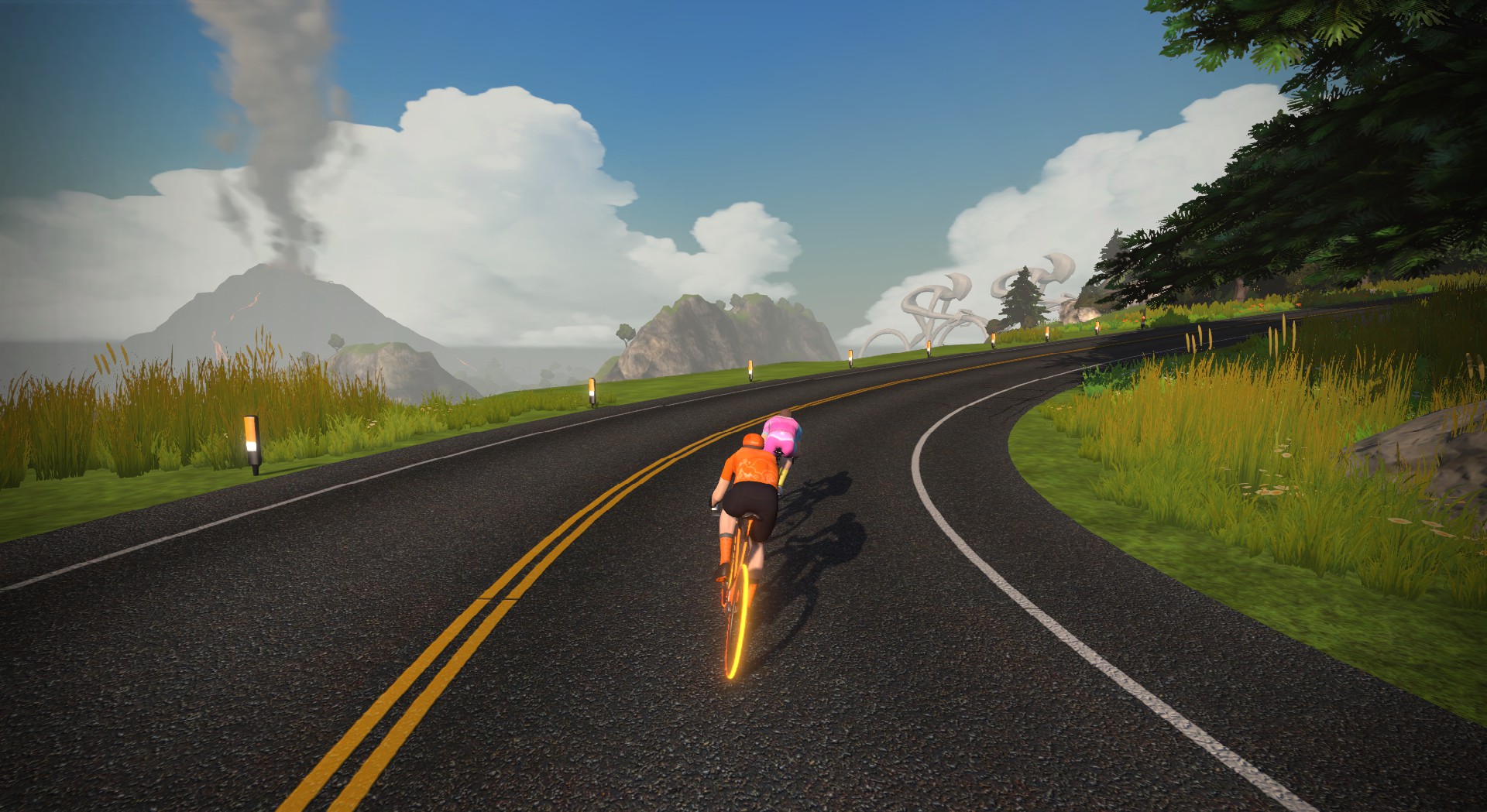 With a shiny new license to cheat from ZwiftPower and with strong assurances from Zwift that the license is not going to get revoked, I quote, “anytime soon”, I am of course eager to get started. I have been waiting for this moment for some time.

As Fortune would have it, however, I ended up in an unusually tricky first race for a ZP approved cruiser. As I clicked Save after the race I had literally no idea of how I was doing. Well, you never do as a cruiser, or even as a legit racer in the lower cats, thanks to the Zwift and ZwiftPower race rules, but this was worse than usual. I could see four different scenarios before me.

With the downgrade to “D almost C” and with two weeks left before a nasty 2.64 W/kg in my 90 day average on ZP is washed away, I was scared I would go over limits slightly already in my first race, which I couldn’t afford just yet. Later, at my current 75 kg, I will be able to do 195W over 20 min and get away with it, but I had decided to stick with the straight 1-hr 2.5 W/kg of 187W as the upper limit for my average. I did monitor my average the whole time of course. But you know, when you do the crime, thoughts on having to do the time do pop into your mind. Doing another 90 days behind the bars in cat C didn’t seem all that appealing now that I was finally free. It shouldn’t have been a DQ. I had watched my Wahoo app power meter closely. But what if still somehow…?

Best case scenario was gold or silver. It all depended, firstly, on the guys in front of me. Some of them seemed to be sandbagging. Some of them were no sandbaggers but had very high power variability and thus looked like the quintessential cruisers, possibly on the cusp of getting DQ’d, but I wasn’t sure at all. I decided to drop from them after a while as I was pressed on time and had less than two minutes to get my average down 5W to be on the safe side in the first 20 min block.

And then, secondly, there was the guy I spent the most time with in the race. He looked potentially legit but wasn’t house broken and just wouldn’t let me exploit him. Since he wasn’t playing ball (cruiser ball) and since he was obviously heavier than me, it was too dangerous to keep up with him so I ended up letting him go eventually. If he turned out to be Mr Gold later on ZP, then I’d happily settle for a silver and call it a day.

But it could also have been sixth. I don’t know why that number popped up in my head. But it represented a scenario where I was way behind in the field. It was a possibility too.

It turned out I actually got a sixth!

I should perhaps point out that I am not disappointed at all. I’m happy to have gotten away without a DQ in my first ZP approved cruiser race and have made a mental note to research my races a little more next time. But I would like to discuss the race anyway as it touches on some interesting points I have been discussing on the blog recently.

So why the meager result? It turns out there are explanations and that this race was actually unbeatable for a cruiser. Let’s look at the race report.

First thing to note is that – surprise, surprise – twice as many riders were sandbaggers and/or unregistered as were cleared by ZP. Seven riders got removed from the ZP results ahead of me, all above 2.5 W/kg. All these people make it harder for legit riders and particularly for cruisers like me to read the race.

The next thing to note, which isn’t visible from the edited report, is that there is a team in the race. Although they get split up (in front of me and behind me) it probably had some kind of impact on the race, e.g. that the pace at start was exceptionally slow and only picked up in the first climb. Nothing wrong with running a team in the race, but it should be noted there was one.

So let’s go over the podium. In 1st and 2nd place are two children. Neither of them cross 200W in their averages and so they get away with W/kg that would make them competitive in cat C and even cat B. They will never be upgraded by ZP since they technically never go over limits and can go on and win races in cat D indefinitely. You can’t win against them as a cruiser, it’s impossible. Even if not holding back (and thus getting DQ’d), I just might have had a chance against young Mr Silver last summer but certainly not today. And young Mr Gold I couldn’t beat even in my wildest long-term goal fantasies.

Then we have Mr Bronze. He actually goes with Mr 4th as they are part of a team, although they are not obviously “colluding”, which again would have been perfectly fine, at least they weren’t toward the finish. It must have taken more than a sprint for Mr Bronze to gain 15 sec on Mr 4th. He dropped his buddy.

However, look at the weights of those two guys. They are true heavy-weighters. No wonder I had a hard time getting my average W down the first 20 min! They are doing 66W more than me! If you don’t understand why this is of huge importance, then you need to read my recent post on the Light Rider’s Curse. Someone like me can’t beat these guys without going over limits. Unknown to me at race start, as I didn’t research the race at all beforehand, the podium was entirely out of reach already from the beginning, even if I hadn’t been cruising and went over limit. Huge weight differences (both up and down) and an idiotic race cat system are the reasons.

Were the heavies cruising? Both have unusually many wins in their race history but I think those can mainly be attributed to the weight advantage, at least in the case of Mr 4th. While not unusual at all, Mr Bronze clearly had spare capacity in this race, and without having had a look at his previous race efforts, I would assume that he could advance to cat C quickly if he committed to it. Like in three races or so. Mr 4th’s race effort is higher. In fact, it is similar to mine as mine was driven up more than expected by this rather strange race. But of course, seeing as I know I had spare capacity too, although not at all as much as Mr Bronze, I believe Mr 4th has it in him to advance to cat C too, should he want to.

Then we have Mr 5th, the guy who wouldn’t let me suck his wheel (and didn’t even seem interested in taking turns with little me!). Since it was just the two of us completely isolated for quite some time, during which I couldn’t draft and get my average down more efficiently, I had ample time to study him. It was clear that he was heavier than me since i) he blasted past me from behind on descents making him hard to lose on this somewhat hilly course, and since ii) my W/kg average got dangerously high trying to catch him. I never quite realized at the time that the weight difference was that large though. A tough adversary for a fairly light cruiser, even under different circumstances, since he was not quite racing flat out (he was definitely not on a recovery ride though, don’t get me wrong). Another day in another race I would have settled for silver behind him. The heavies are a real menace to us not-so-honest not-so-hardworking cruisers…